Asus is known for their fete in producing top gaming laptop models in the world. Over the years, this has remained their territory and the Asus GL551JW model is just part of their success story.

This is an incredibly hot deal in the gaming world. In this Asus GL551JW review, I’ll show you why it’s true to say this is a top brand in the gaming industry. Unfortunately, the deal comes at a cost beyond the normal gaming machines in the industry.

The sexy and well-built machine combines strong performance with a vibrant display, stealth-fighter-themed chassis, and a snappy keyboard. To be honest, we wished their battery life was longer. The left side gets hot when playing too.

The latest panel of ROG devices in the market has left a spur. The multimedia notebook is built for multiple tasks with gaming at its core. It comes with quality features best suited for gaming. It is created in a compact way, and its 3kg weight is among the best in the market today. 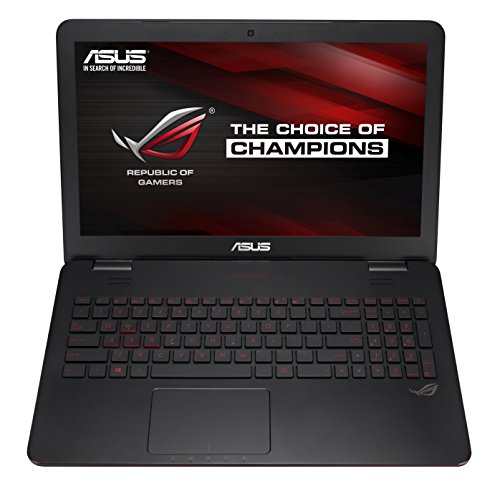 Its performance is undeniably top-notch thanks to its huge system memory and a powerful quad-core processor.

The machine handles multiple tasks concurrently in an effective manner. The need to store bulky multimedia files and programs is not an issue thanks to the 256GB SSD and a conventional 2TB HDD.

Every gamer wishes to run on a powerful GPU, and that is what your new Asus GL551JW machine has to offer: it has a dedicated graphics memory to ensure quality gaming without lags.

The wide 17.3” Full HD display ensures that you have a breathtaking gaming time while using this machine.

To put things into perspective, the Asus GL551JW name comes from the manufacturer’s high-end Republic of Gamers (ROG) brand.

The latest deal can handle modern and top games at 1080 without hitches and costs within $1,000. The powerful machine is designed to work well for gamers and other creative tasks.

The Design and Build

The keenly designed gaming hardware for Asus GL551JW machines has taken many of its competitors by surprise. There is an incredible balance between a gaming laptop and a subtle smartness.

In all of its ROG series, Asus has maintained a standard for its design. The lid comes in a dark mottled plastic that has a brushed metal center-panel that bears the RPG logo.

Through the interior is black while the logo, letters, trackpad, and the keyboard backlighting are surrounded by red the top area above the keyboard is decorated with a lined pattern that is known to have been inspired by South American tribes.

Despite the aluminum lid, that is argued to have been inspired by the F-22 fighter plane, and the ROG machines have not invested in a sleek casing as compared to its competitors in the market.

There is some silver patterning that has been added to bring some flair to the ROG machines’ black metal deck. This complements the sinister red backlighting to make the gaming powerhouse a true deal.

There is a detailing on the left vent that reinforces the red-and-black color scheme – it serves as a reminder to avoid this area, which could get pretty hot while gaming.

Asus GL551JW is designed for performance. Gaming is fun, and the decorated Asus ROG keyboard adds to that. There is an extra band of red highlight along the W, A, S, and D keys. During our reviews, it felt snappy typing on the black plastic keys.

The num pad to the right has been squeezed to allow the 10 keys, which have been shrunk by almost half the size. On the typing test, I managed a cool 83 words per minute after a moment using the keyboard. In almost all the ROG machines, the keyboard design is similar.

Our team could not identify any tactile or visual differences. The keyboard is ergonomically ideal for gaming.

There is a sophisticated impression that comes with keyboard design. The evenly distributed red illumination makes the entire design modern and one of its kind. The illumination can be dimmed in three steps or completely deactivated. All keys are made with an anti-slip surface making it easy to use.

The touchpad has shallow backlighting, not like the keyboard. However, the 4.1 x 2.75-inch touchpad comes with a similar responsiveness level.

During the review, my clicks, swipes, and multitouch gestures were accurately and immediately registered. This included the two-finger scrolling. The ClickPad surface is smooth and well-sized for easy use. Even with slightly moist fingers, the touchpad works okay.

Gaming on a Full HD 15.6 or 17.3” display is a thrilling experience. This is a quality gaming display for most gamers. It is utterly ideal considering the poor experience on lower resolutions and the demanding status for mobile GPUs in higher resolutions.

The Asus GL551JW uses a TN panel, which is at least matte. The determined brightness of 289 cd/m is an average one for this series.

Unfortunately, on a dark picture, the backlight illumination could be seen on the sides. This is due to the 82% brightness distribution. Fortunately, it is even and thus not considered screen bleeding. Watching videos with dark passages could be annoying on this screen. The contrast level is exemplary thanks to a combination of low black levels and high maximum brightness that offer 1156:1. To put things into perspective, only Lenovo and Acer can deal with this.

There are rich blacks and even brighter while HP and MSI have an issue with high black values.

DeltaE color deviations of 12 or more are common for TN panels. The grayscale measured 6 and 8. There are 15.6” screen delights that offer better accuracy, spot-on colors, and top-tier brightness. This is an ideal machine for gaming and watching movies.

The display is non-touch and features matte coating. The ASUS ROG screen does not have own reflection problems. The DeltaE error rate of 0.7 is utterly perfect, and the display offers more color accuracy than V15 Nitro (1.0) although Inspiron 15 7000 had better results of 0.4.

Screen brightness for the Asus screen stood at 272 nits. This was just nicks behind the Acer V15 Nitro at 289 nits. On the other side, the machine performed better than the Dell Inspiron 15 7000 at its 222 nits. The color range spanned 116.2 percent of the sRGB spectrum. Both Inspiron and the V15 Nitro trailed with 70 and 115% respectively.

Featuring the SonicMaster tech that provides high-fidelity, rich audio, the ASUS ROG GTX960M stereo will thrill you. It is a brilliant combination for any gamer or while watching movies.

Streaming HD from Hulu might not be as demanding for ASUS ROG machines. On the flip side, gaming causes the machine to overheat on the left side.

The powerful gaming machine comes with a powerful GPU. It is true to say; you can hardly find a better deal than the GTX 960M graphics memory that comes with the Asus GL551JW gaming laptop.

The dedicated NVIDIA GeForce has 2GB VRAM making it a master in its level. The GPU scored a cool 4,095 on 3DMark’s Fire Strike synthetic graphics test.

This was averagely the same as most of the competition. On the contrary, the performance was much higher while pumped on high graphics, giving the competition at least 20 fps margin.

Powered by a 2.6 GHz Intel Core i7-6700 HQ processor, the machine runs on a 16GB RAM and 1 TB HDD. These are great specifications to make the machine a gaming monster.

It can handle multiple tasks at the same time while gaming without lag. The HDD speeds are at 720 RPM against V15 Nitro and Inspiron 15 7000 whose speeds are 5400 RPM.

Asus GL551JW Review: A Wrap Up

Other than a few itches on the battery life and size as well as weight, this is a powerful machine to work with. It is a decent deal for gaming lovers on a budget. It has a great display, and the chassis is top-notch. It can handle enough tasks and can compete favorably in the market.

My name is Eric Smith and I've been working within the tech space for over 10 years, both at one of the largest computer manufacturers (for which I have no affiliation with anymore) but also in the retail sector where I gained a lot of experience in helping people finding suitable tech products.